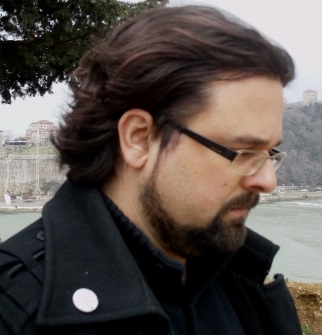 How does your work as a journalist influence your novels?

I’m not sure, to be quite honest. But then again, there are only few things in which I am sure … I used to think that my journalism damages my literature. That the line between journalism and literature is getting blured for me. Now I think it helps. It provides discipline, and discipline is very important in the process of writing a novel. By that I want to say: amongst other things, a novel is hard work. And like any good work, it can’t be done without discipline.
Not only that. Instead of letting journalism interfere my literature, I let literature interfere my journalism. I started to treat journalism as the literary form. Now, I am a better journalist. Am I a better writer too? I don’t know.

How does the atmosphere of the text relate to everyday life in Ulcinj/ Montenegro?

Well, I don’t really have a normal, or should I say: ordinary life in Ulcinj. I have very few social contacts during the week, sometimes not a single one in a day. I live in an olive forest near the town and I go to the town only when I really have to, when it is impossible to avoid it. I don’t make for my living in Ulcinj. I work from my house for companies outside Ulcinj. I always tried really hard to get as little of Ulcinj as it is possible. When I came here from Sarajevo, it was a cultural shock for me. And I am still in the state of shock. That reflects in my books.

Did the existentialism of Camus and Sartre influence your own life?

No, no. Only my literature. Thank God for that.

How would you interpret the blankness, which »surrounds« Konstantin in the end of the novel?

I would rather not answer this question. Because the ambivalence of the ending of »The Son« is very important to that book. I don’t want to ruin that ambivalence by offering a final explanation.

Why should your last novel »Devet« (2014) also be translated into German?

Might be because it’s the last part of the trilogy »Tamno pokoljenje«. »The Dark Generation«, or »The Dark Race« in English. The first two parts are »The Son« and »The Coming«, published in German by your house. For which I am truly thankful to you people at Voland & Quist. Literature written in German language was very important for me in the process of writing that trilogy. References to Thomas Bernhard are obvious, also the references to Georg Trakl. After all, the title of the trilogy I took from Trakl, from his poem »Traum und Umnachtung«. So, bringing my text, influenced by the literature written in German language, back to that language, was just, and also the greatest honor to me.